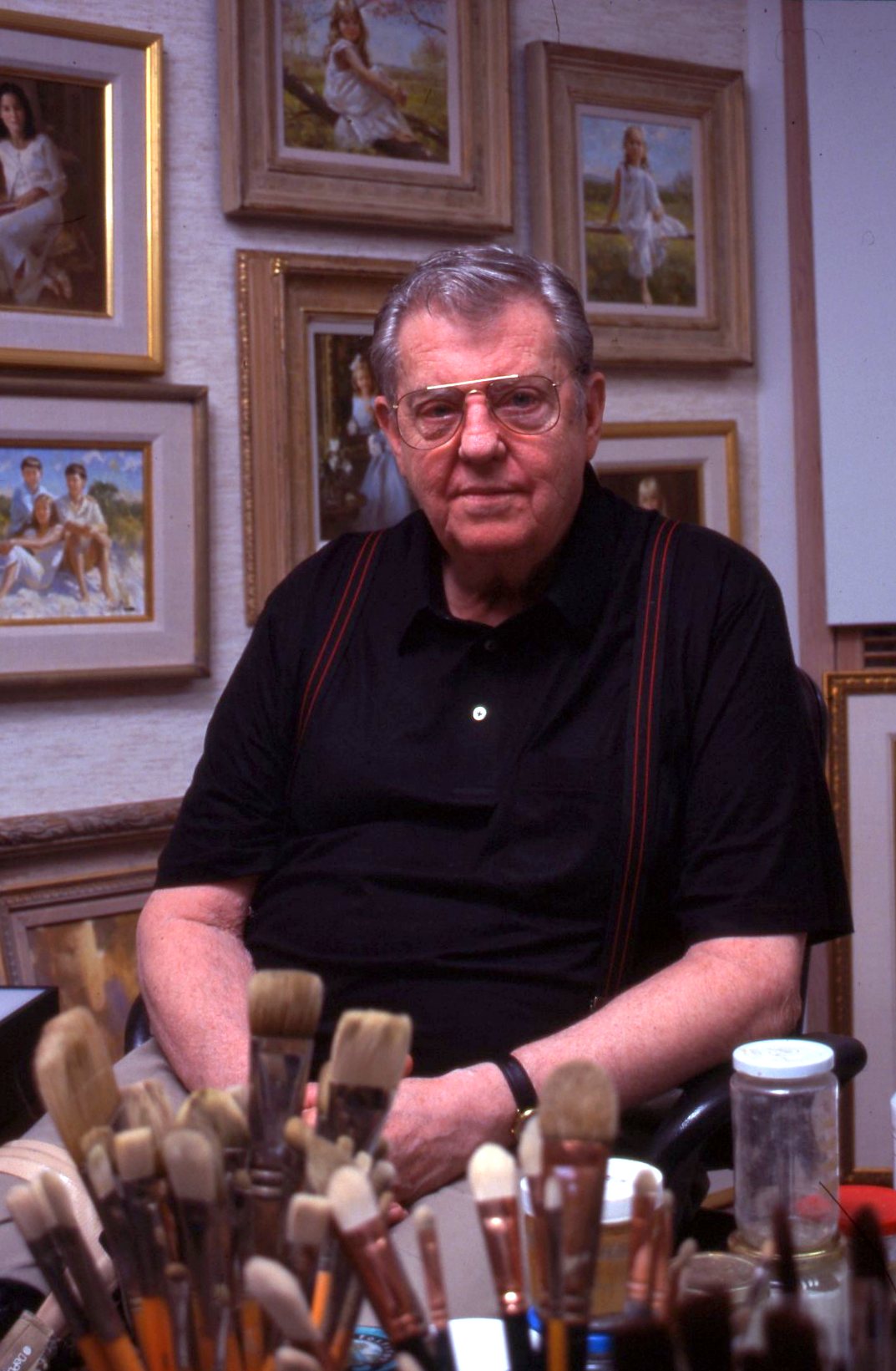 ​photo by Rob Kaufman
Born in Forest Hills, New York in 1928, Joe began to draw when he was three. His first illustration for a national magazine was published by Cosmopolitan when he was nineteen. While working as an apprentice at the prestigious Charles E. Cooper Studios, Inc. he had the opportunity to learn the craft from some of the finest artists in the profession.

At Cooper Studio, Joe was inspired by the illustrations he saw being done by the top artists in the field. During the day Joe’s time was spent cleaning palettes and brushes, matting paintings and running errands. He did his own work in the evenings, sometimes working all night. After being there about six months, Coby Whitmore brought Joe an illustration for matting. Coby saw a sample illustration Joe had been working on the night before and asked if he could take it with him to Cosmo to show the Art Director. Upon Coby’s return, he told Joe, Cosmo had bought the sample and to bill them for $1,000. Earning $35 a week at that time, it seemed like a fortune. Within six months, Joe’s illustrations were appearing in three major magazines. Coby became a mentor and friend to Joe, a friendship that lasted a life time.

Bowler contracted polio in 1958, while on vacation in Europe. The polio initially effected all of his muscles  and he spent 7 years working with a physical therapist, Henry Stano. Though the recovery was long and painful, about three months in, Joe regained the use of his hands and arms and got back to the job of being an illustrator, that is painting. It was a turning point in Joe’s life, not only in his physical capacity  but his attitude and approach to painting.

Joe was elected to the Society of Illustrators in 1952.  In 1967 The Artists' Guild of New York named Joe their Artist of the Year. By this time, magazines were commissioning him to do portraits of well known people. These included a 1968 McCall's fashion article portraying eight presidential candidates' wives; the August 1971 issue of Ladies' Home Journal cover portrait of Rose Kennedy; The Saturday Evening Post cover of Julie and David Eisenhower.  In 1992 Joe was inducted into the Illustrators Hall of Fame.

In 1972, Joe and his wife Marilyn moved to Hilton Head Island, South Carolina. This proved to be the ideal location in which to make the transition from illustration to portraiture. Portraits have been Joe’s primary focus since the move but he makes sure to take time to paint just for himself.

On March 10th, 2008, Joe’s wife Marilyn died. Married for 58 years they shared a partnership in every sense of the word. Marilyn was a true collaborator and support system standing beside Joe in work and family. Over the years Marilyn handled the business of portraiture, the business of being a successful artist. Many of the painters who have visited Joe over the years were in awe of Marilyn’s understanding of how to become a successful working artist. Her grace and charm in meeting with clients as well as other artists was truly remarkable. We miss her warmth, guidance and wisdom.

On November 14th, 2016, Joe died in his home on Hilton Head Island, SC. His daughters Jolyn and Brynne and his grandson Coby were with him. He painted almost every day of his adult life and loved doing it. He was a generous soul and saw beauty in almost everything. He adored his wife Marilyn who was his best friend, best critic and truly the best partner he could have had.

Please note that all images on this website are the sole property of the artist's estate.
No reproduction of these images is allowed without the express written permission of a representative of the estate.
All rights reserved. © 2021